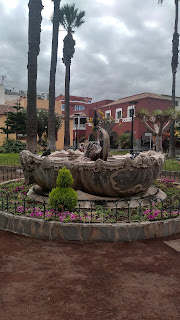 A couple of weeks ago, my partner and I headed north from where we live in the south of Tenerife. The island itself isn't very large, so our journey to Puerto de la Cruz on the northern coast, only took around two hours. Only stopping for a short time to have a sandwich and a coffee, which was welcomed, after rushing around at the last minute.

The small city itself sits on the other side of Mount Teide, and the area differs greatly from where I live in the municipality of Arona, which consists of many purpose built tourist areas. In the year-round warm/dry climate, rain in the south is a rare commodity, which means the land is barren and desert-like.

Puerto de la Cruz has a sub-tropical climate, and near the city, the gardens and parks are filled with tropical green lushness. Yes, that means slightly more rain falls here, but the winters are still warm here and summers dry. 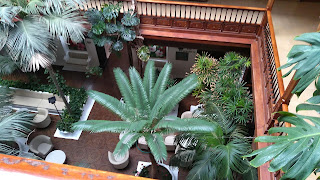 Its clement climate has made it attractive to European tourists for centuries, many of the owners of large homes here turned them into hotels, many survive today. It has been a choice of place to visit for many famous writers since the early 19th century. One travel such writer, Olivia Stone, I featured in an earlier blog post. https://devilslayingamongstotherthings.blogspot.com/2015/03/romancing-stone.html

Irish born doctor and writer, Sir William Wilde, father of Oscar, travelled to Puerto de la Cruz in the early 19th century, at that time the port being known by its English name the Port of the Cross. His ship docked in Santa Cruz but he travelled the north of Tenerife, in search of a cure for tuberculosis, the climate being a key element in his medical research. His travels are documented in the book https://books.google.es/books/about/Narrative_of_a_Voyage_to_Madeira_Tenerif.html?id=o09BAAAAIAAJ&redir_esc=y 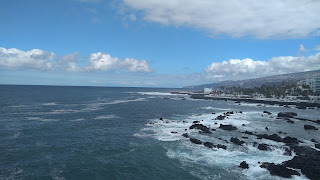 I can't help but mention author, Agatha Christie,  who stayed in Puerto de la Cruz too, in 1927. In the week that she stayed there she wrote, The Man from the Sea and The Mystery of the Blue Train. A bust celebrating her visit can be found in the, Mirador la Paz. https://www.amazon.com/Man-Sea-Agatha-Christie-Short-ebook/dp/B00D64I5TK

The city of Puerto de la Cruz is a city of eternal spring, it continues to surround visitors with a beautiful botanical landscape, a place that continues to put spring into my step when I visit. 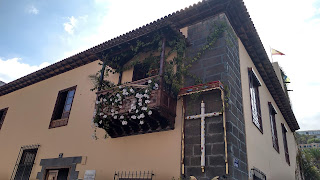 Posted by Christina Rowell Author at 07:06 No comments: