Today it's an honor to introduce you to the gifted J Edward Neill in my, Author Spotlight, post. Jeremy is a US based indie author of fiction, sci-fi, philosophy and has published short stories for Kindle's galaxy-wide.

If that's not enough to be going on with, he is also a talented painter, bringing canvas alive with his imagination and use of color. He has been writing for the last sixteen years and has an extensive catalogue of titles to his name including a series of dark fiction of which he is the co-author. His first book Down the Dark Path was published in 2013 and he has agreed to giving us a look into his world.

I hear plenty of authors talk about the challenges of deciding on book titles (and blurbs.) As for me, I enjoy the process. I usually design the title and blurb long before getting into the meat of writing the book. I try to nail down the central themes of whatever I’m working on, and then I make a list of potential titles. For my latest sci-fi book, Shadow Forever, I allowed my readers to decide the name. It was fun to hear their feedback! 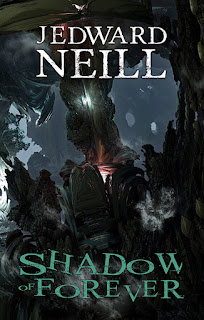 Reach J Edward at his website – Down the Dark Path

…or at any of these fine locations:

Posted by Christina Rowell Author at 03:12 No comments: