I promise this will be the last post about my recent vacation. The thing is, my mind is overflowing with many wonderful memories of the long weekend I had in La Gomera and I want to share them with you.

I told you about the inhabitants who tend their flocks and till their land, but there are another group I omitted to tell you about and they are the fishermen and women who cast their fishing lines on a daily basis.
Sitting on the sunny balcony of my holiday apartment, sipping my morning coffee I was mesmerised by a dedicated group of people, who made fishing into something that resembled a ritual.

I focused my attention on one man who had been perched on some rocks for an hour, or so and was successfully hooking fish after fish. My attention was then drawn to a woman who arrived on a bicycle. She propped her transport against the sea wall and climbed down onto the rocky beach below. Removing her rucksack from her back, she placed it on a small rock and she began to change her clothing. She neatly folded her trousers and shirt, placing them safely inside one of the compartments of her bag.

She changed into sensible footwear, clipped her fishing rod together and then she took out a large cloth bag and hat which was hidden away in her rucksack. Having adjusted the long strap of the bag across her body, she finally covered her head with the straw hat of which would not look out of place in a Huckleberry Finn movie. She secured the rucksack and placed it on higher ground and she started to paddle through the huge pools of sea water that had been left behind from the outgoing tide. 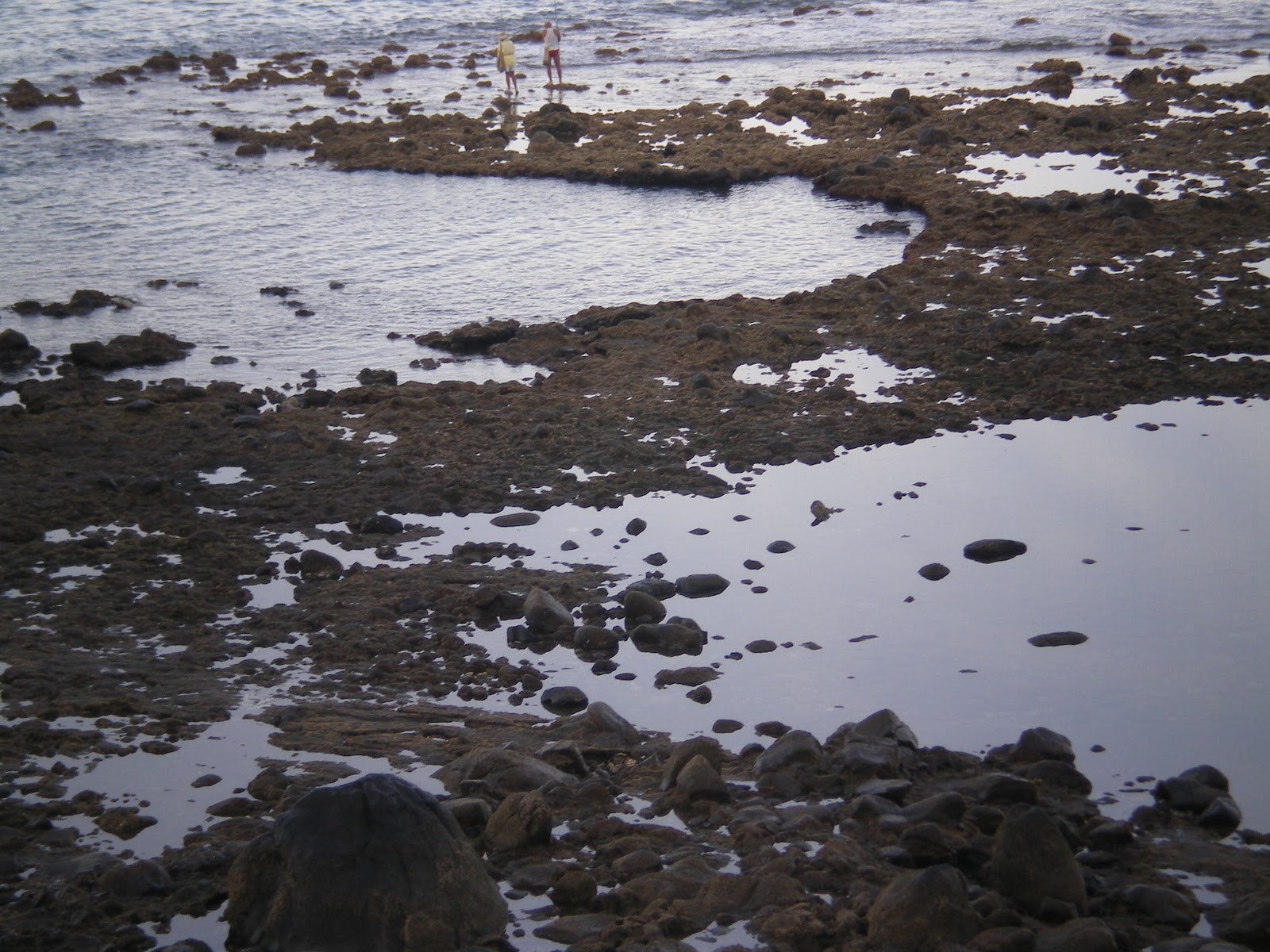 The woman joins the man
She joined the man standing on the rocks and she kissed him on the cheek. He sidled along the slippy rocks, making room for the woman to stand beside him. They chatted and laughed as they cast their long fishing lines into the Atlantic. Both plopped their slippery catch into what seemed to be matching bags, his he had tied around his waist. 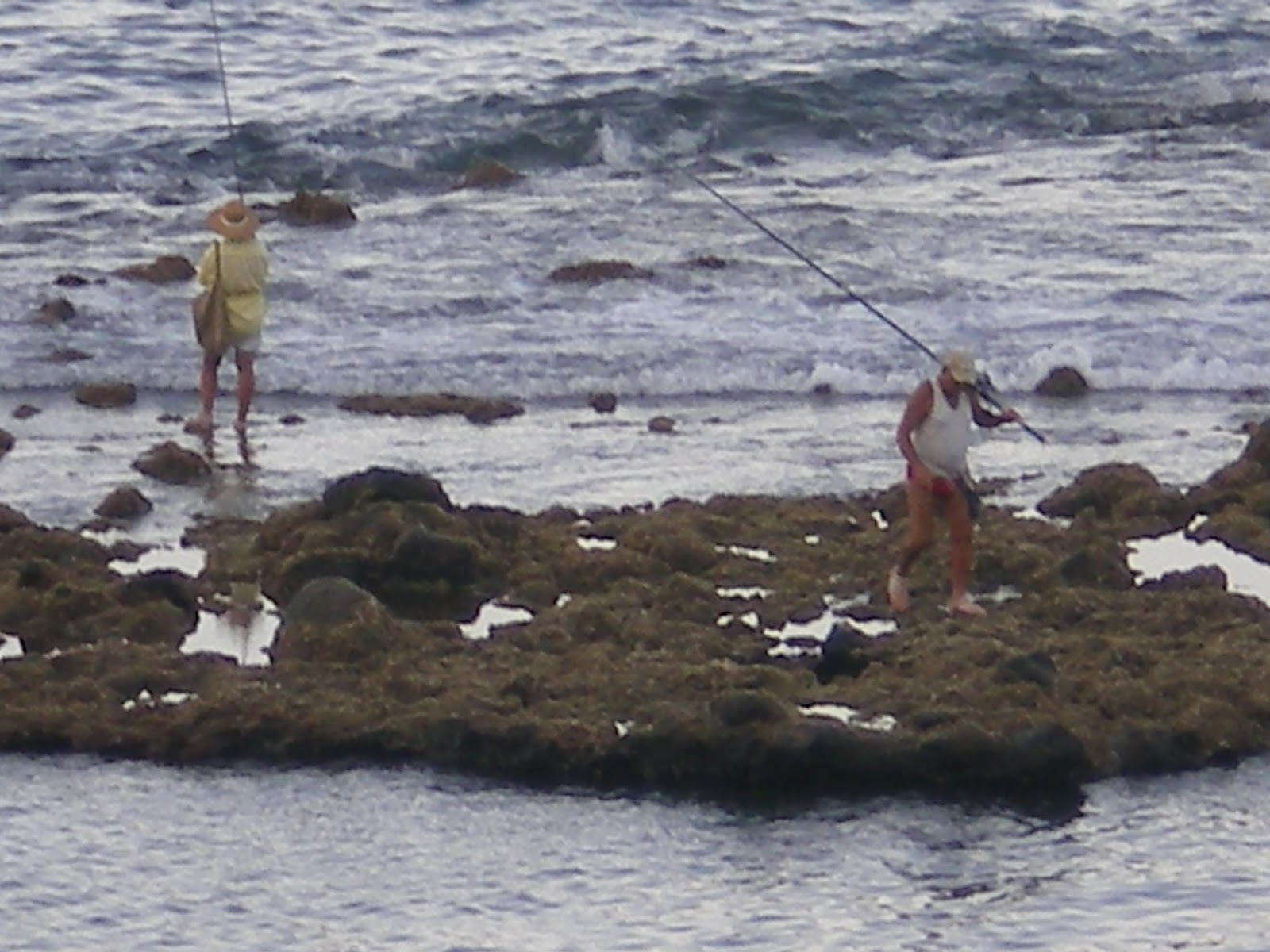 The fishing couple
Within another hour the speed of the returning tide hastened and the couple were being lapped by the shallow water that surrounded them. As the sea started to swallow up the rocky outcrop the couple were standing on, they decided it was time to leave and they jumped down into the water. They  lifted their rods and bags up to chest level and the pair waded ashore.

As they examined their catch out of reach of the incoming tide, I noticed that the spot they were fishing from only minutes earlier could no longer be seen and all there was for me to do now was to be soothed by the sound of the waves as they rolled over the pebbly remains of the beach. 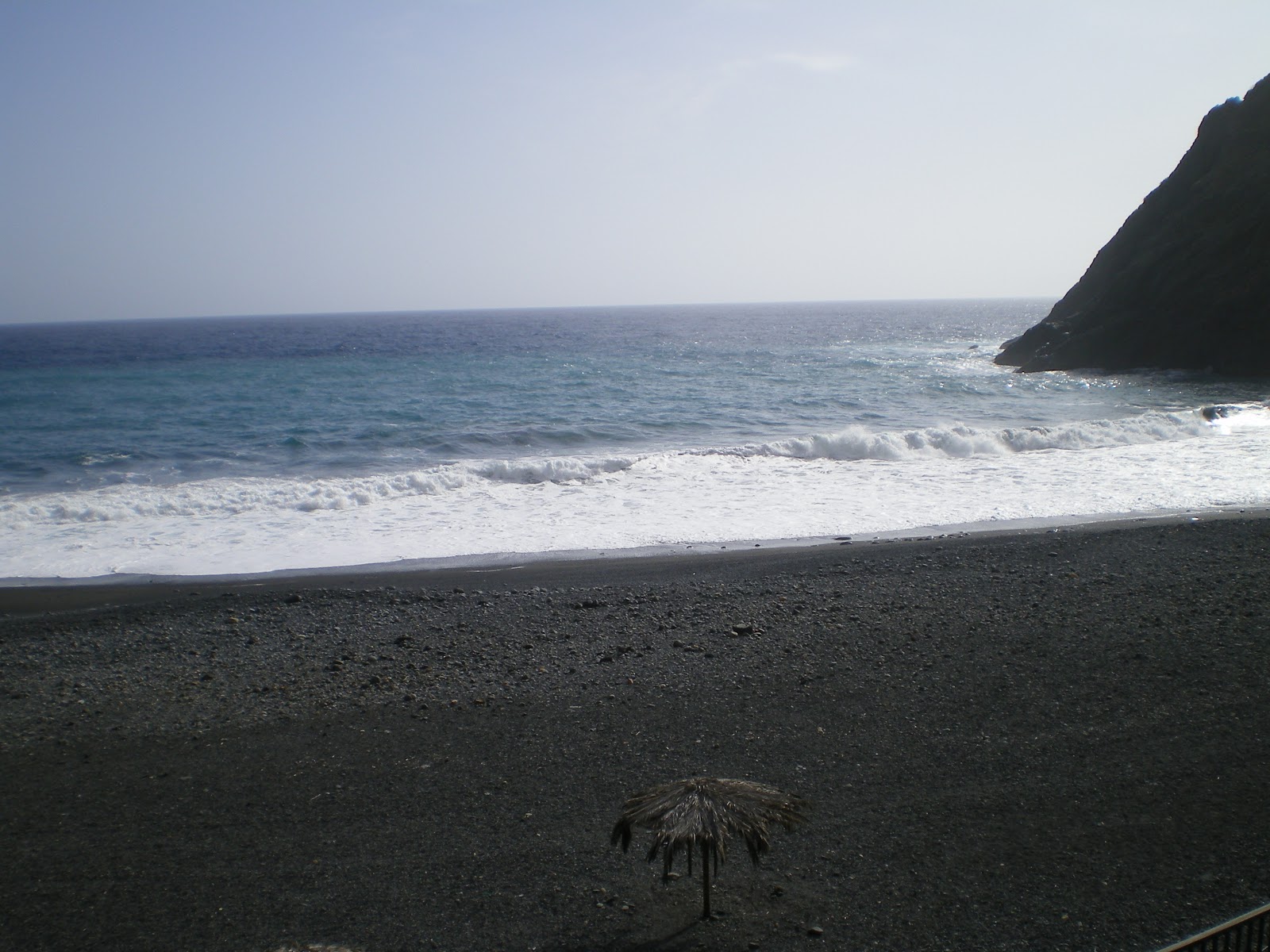 The waves rolling over the pebbly beach
Posted by Christina Rowell Author at 02:12 No comments:


In case you don't already know, my favourite place for a vacation is the Canary Islands, Spain. Having just returned after a two week break on the island of Tenerife, I thought I would tell you about one of the other islands I have rediscovered after last visiting there twenty years ago.

Rising out of the Atlantic Ocean, off the west coast of Africa, La Gomera is an island that to a certain degree time has forgot. There is no shortage of mod cons, but the inhabitants live much of their lives as they always have throughout the ages, tilling the rich fertile land and tending to their flocks.
Whether the crop be potatoes, tomatoes, or bananas the micro climate allows the small population of around 16,000 people to be self sufficient. The island is the second smallest of the seven islands, that make up the Canary islands. But what it lacks in ground mass only measuring 15 miles across, it certainly doesn't lack in beauty, including an Unesco World Heritage Site. 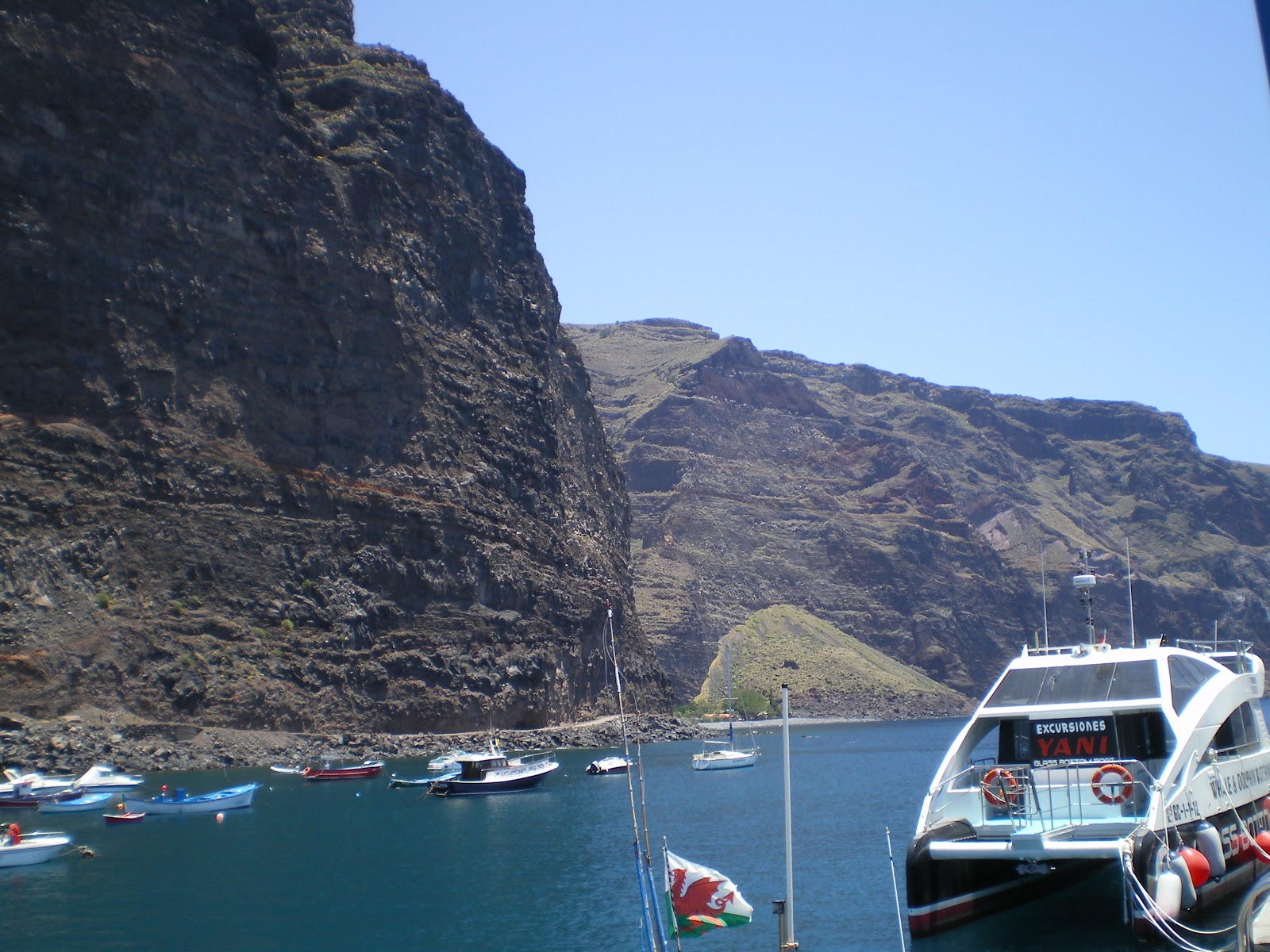 Travelling by car from the port and capital, San Sebastian, after disembarking from the ferry, which we boarded in Los Cristianos, Tenerife,  to the resort of Valle Gran Rey, the scenery was breathtaking. The island itself is mountainous, but feats of engineering, in the way of mountain tunnels and good roads make the journey quicker and less treacherous than it was on my last visit. 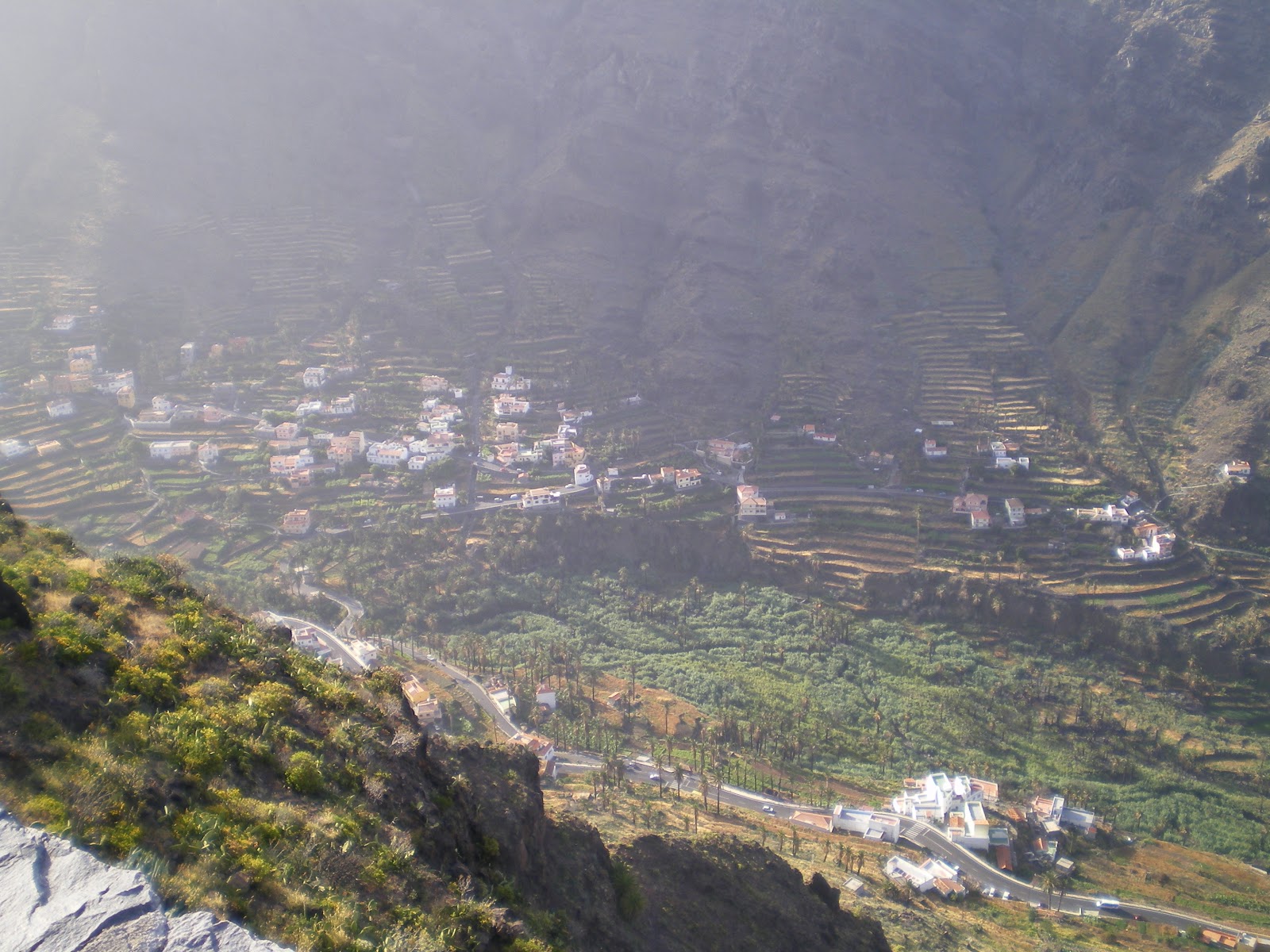 A villages nestling in a deep ravine.

Small villages defy gravity by hanging precariously onto the edge of the mountains, while others nestle in the deep ravines. But the people of each village, working as cooperatives use the sides of these mountains to grow vines and crops. Whilst their sheep and goats dot the rocky outcrops. 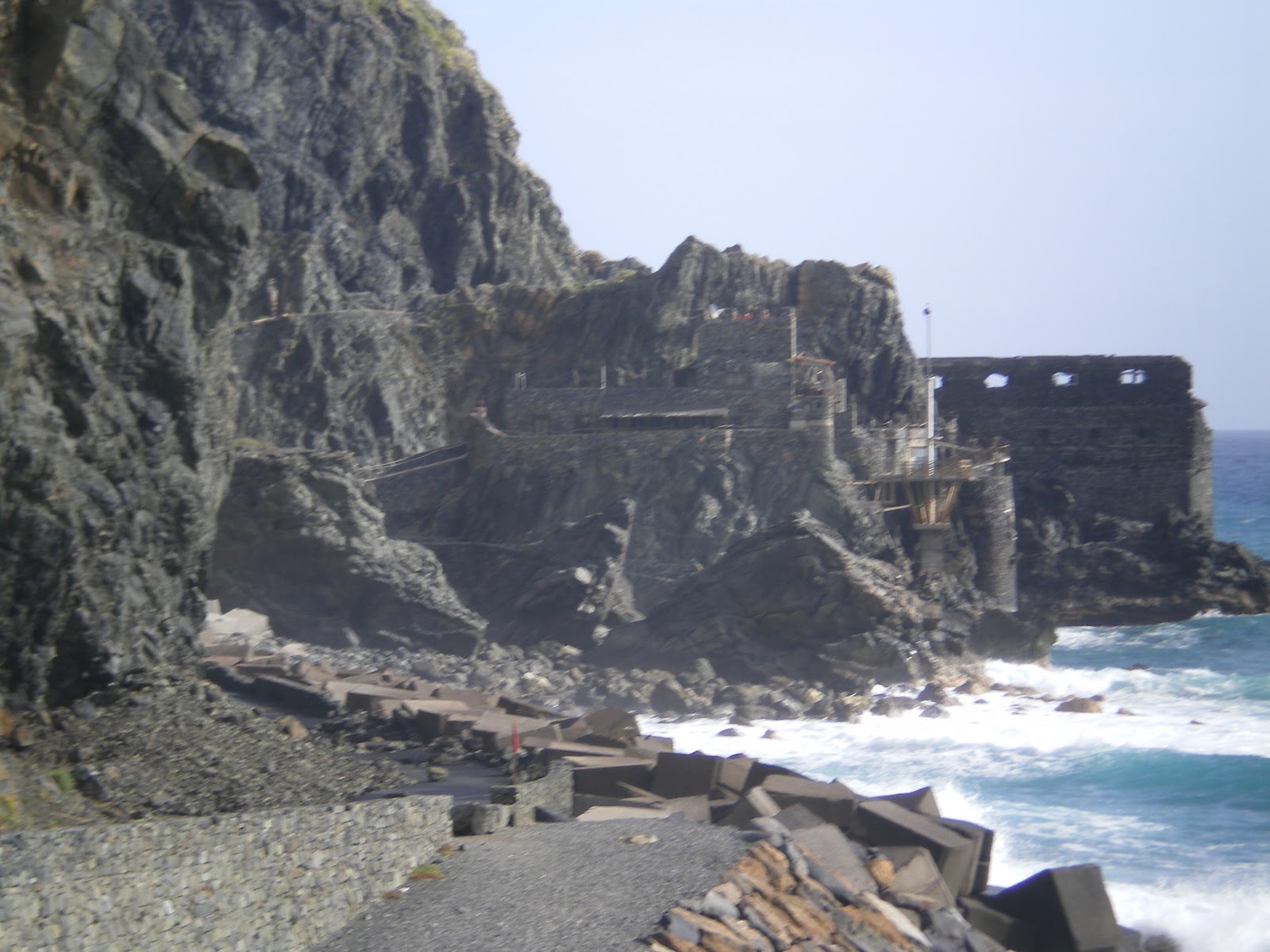 It's no wonder that Christopher Columbus visited this island three times to replenish his ships with food and water. The first being in 1492 when he stopped here with three ships before crossing the Atlantic. The second in 1493, this time with approximately 17 ships and finally again in 1498 before his onward journey to the Americas. 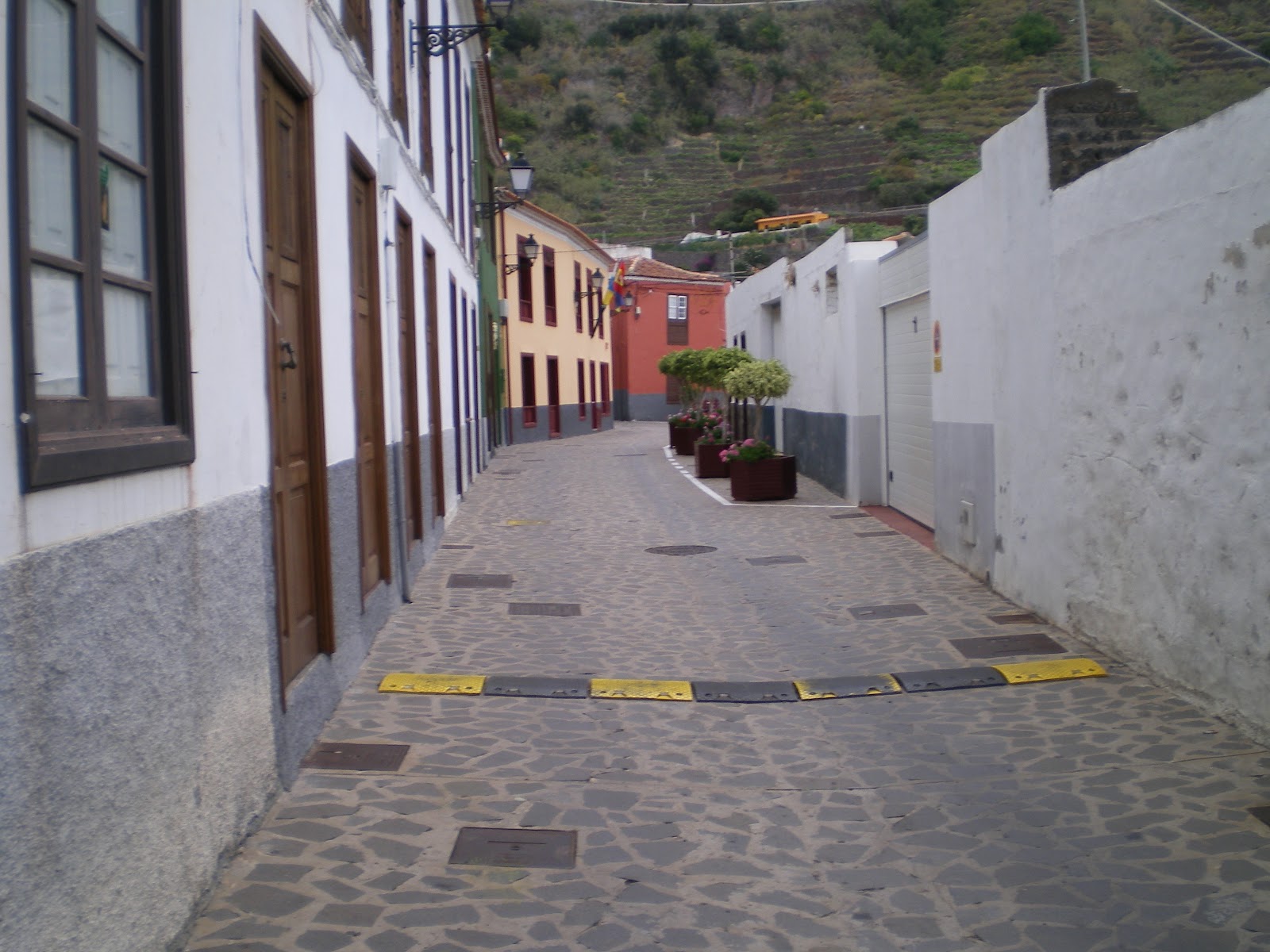 Typical village street.
﻿
I would recommend to everyone who visits the Canaries (Las Islas Canarias) to make a pit stop here, without a doubt.

I introduced my friend Robin (above) in a post back in November 2012; but I wanted today to introduce you to the new kid in town (below). This new little guy is the first of Robin's new offspring. How cute is he/she?

Posted by Christina Rowell Author at 01:43 No comments:

It has been sometime since I've worked in an office and on occasions I've thought it would be great to have some coworkers again.

But after reading the survey conducted by 'The Institute of Leadership and Management,' the things I don't miss about working with other people came flooding back.

Of course I can list all these little niggles because I'm perfect and my ex-colleagues I'm positive never found anything I ever did caused them any irritation.

Posted by Christina Rowell Author at 04:33 No comments:

It Has Been Just One of Those Days

A recent survey done in the UK by Crucial.com, found that slow computers were top of the list when it comes to the things that irritate us most .

According to their research, computer rage is more common than road rage. Now, as someone who regularly engages in an animated conversation with this particular inanimate object, I'm glad that this survey was carried out.

Why? Because I can at last admit to the world that I shake my fist, pull at my hair in frustration and raise my voice on a regular basis at the screen that's in front of me. Especially when I'm trying to post my blog, tweet or e-mail.

My partner on many an occasion has stuck his head around the study door and asked "Are you okay?" Only for me to tell him that "Yeah, I'm good. I'm talking to the computer." Whilst typing this very short piece,  I have had several disagreements with this necessary evil, but I think I'll just put it down to having one of those days.

Do you suffer from computer rage?

Posted by Christina Rowell Author at 22:58 No comments: