At the beginning of this month, after a fashion, I've uploaded my profile on to the Goodreads website. For those who are now friends with me there, I can only apologise because it's all a bit gobbledygook to me and it's taking me a bit of time to get to grips with how the whole setup works. So if I'm meant to message you when you become my friend I haven't. Oops! Hi, I do want to be your friend and I am interested in what everyone has to say. Can you hear me grovelling?

The thing is at present I don't have the time to sit down and navigate my way through every piece of the site. Yeah, I know I'm supposed to tell you what I'm reading. But I haven't even uploaded the books I've just finished, or about to read, never mind what I'm reading now. I'm trying to fit all this social media stuff in with my writing schedule and the writing takes priority. Eventually how it works will sink in and I'll be able to keep this ball up in the air along with the rest I'm juggling.

Excuses now made, if you're not already my friend on Goodreads, why not? You can also join me on Twitter. Hopefully, you navigate through websites better than me and you'll click the button. Maybe I should hire the guy with the canal boat to do it for me.

Stopping kids accessing hard core pornography and other uncensored material, especially child abuse on the Internet is a problem for all parents. Parental controls can easily be bypassed, especially when children are more computer literate than most parents.

A recent report has stated that children having access to certain types of pornography develops harmful attitudes and behaviours. Some believe that without the help of Google, Facebook, Microsoft and Twitter, the unsavoury matter will be impossible to deal with. So it's been great news that Google has pledged $4m to help tackle the problem and other Internet providers are putting other safety measures in place.

It is also hoped that by adding a more rounded sex education to the UK school curriculum, inclusive of effective relationships which would include ones of the same sex, and safe use of the Internet, the world will be a safer place for our kids.

It's a problem that won't go away and I believe education has a huge part to play. But parents and guardians can't solely rely on schools to educate the kids of the rights and wrongs. It doesn't matter how awkward a parent feels about discussing this subject it has to be done.

That's where I believe literature can help too and I mean both non-fiction and fiction. A good book as we know can be a great conversation piece and is a great way to get a subject matter across. I know that whatever we do, won't eradicate the problem, but not talking about sexual exploitation certainly won't make it go away.

Posted by Christina Rowell Author at 03:20 No comments:

At some point in our lives we'll be touched by cancer. Whether we fall victim ourselves, or we are effected emotionally by a relative, or close friend contracting the disease it will make a lasting impression on us.

I know in my grandparents day it was seen as a certain death sentence. Unfortunately for some of us it still is, but because of the wonderful research that is conducted by organisations such as Cancer Research UK, lives are being saved, or prolonged.

Things are tough in this world when most of us are feeling the financial pinch, but it's important that we don't forget charities. Without our donations it will be impossible for them to continue with the work that they do.

A close relative of mine is taking part in the Race for Life this weekend in Dalgety Bay, Scotland and he has been busily fund raising with his work colleagues over the last couple of weeks. The event itself, raises money for the charity but importantly it also increases awareness of the disease itself. This particular fund raiser takes place overnight, in various locations throughout the country because as Cancer Research UK reminds us, the disease itself never sleeps and all communities are affected.

If you would like to find out how to donate, take part in fund raising events, or information on the disease itself, please click here www.cancerresearchuk.org 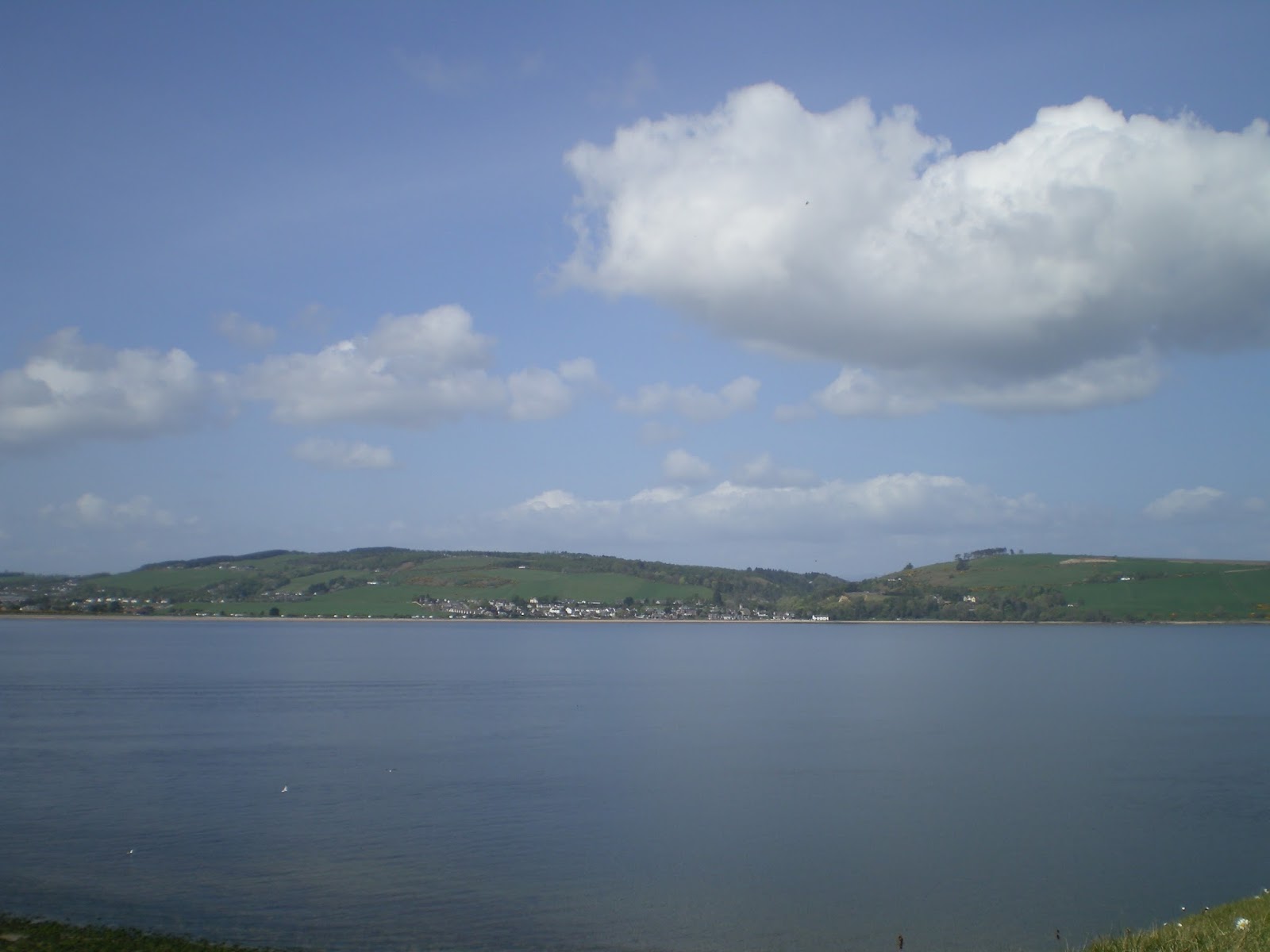 Posted by Christina Rowell Author at 23:23 No comments:

Father's Day has been and gone for another year. My own father and father-in-law have now been dead for some years but nevertheless they were in the forefront of my mind when the day dawned.

With the commercialism of the day hard to escape, I started to think about fictional fathers and role models in some of the books I've read. I came up with this list of my favourite ones, yeah, some aren't perfect, but like any father or male role model in real life they have an important part to play.

How about you, do you have any fictional favourites that come to mind?

Posted by Christina Rowell Author at 01:52 No comments:


Writing to me is all about drawing pictures with words and visiting beautiful places is something that I find stimulates my creative juices to no end. Yes of course reading does, but I don't know if it's because I write fantasy that I find that visual experiences just seem to have the edge.
﻿
Barcelona, Spain is one such city that really is a fantasy author's dream, well this fantasy author anyway and it's all down to one man Antonio Gaudi. Gaudi was a Spanish architect who had great vision and his designs fill the streets and parks of Barcelona. Two such places are La Sagrada Familia and Park Guell, both sites demonstrate the man's creativity. 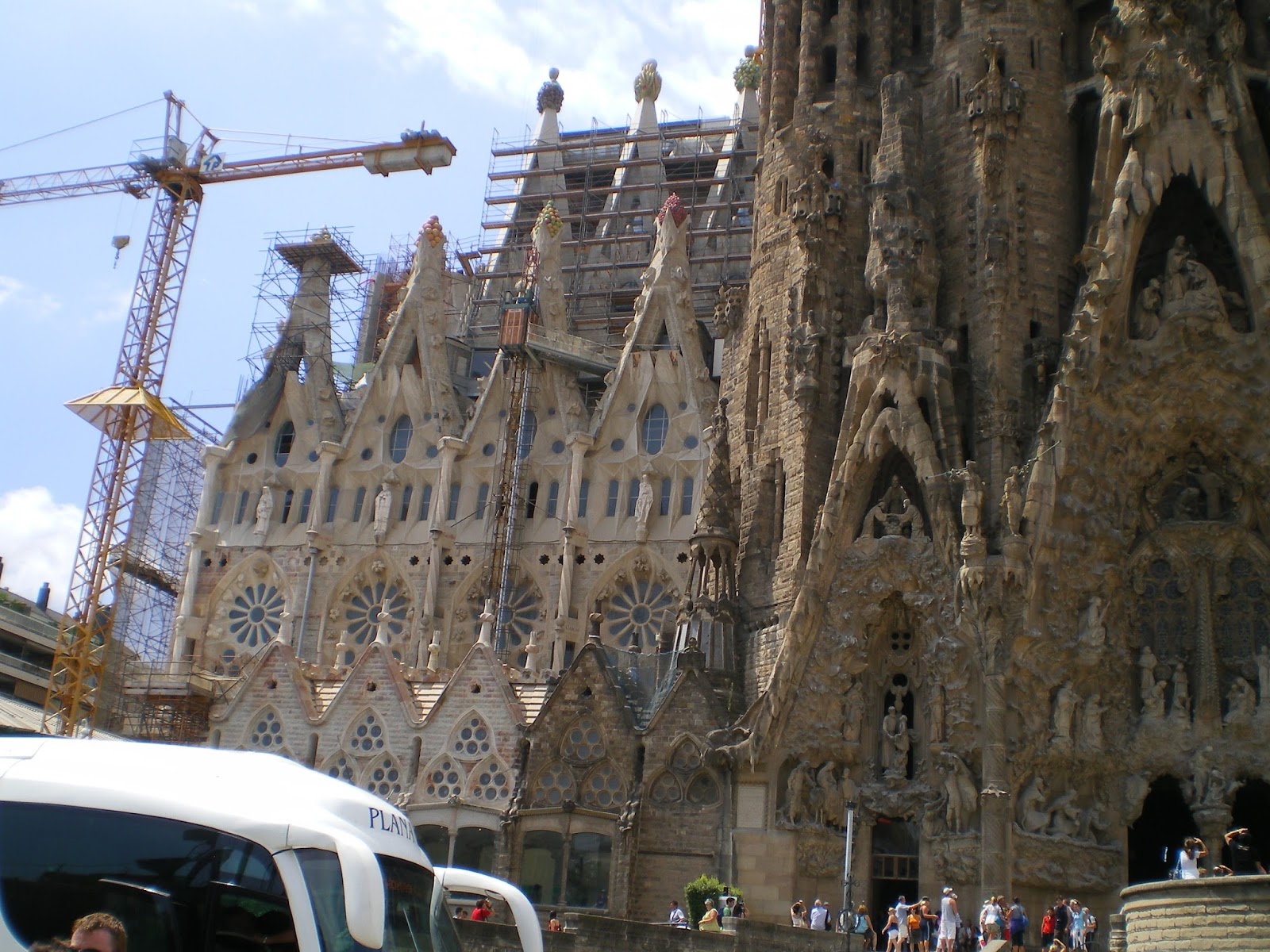 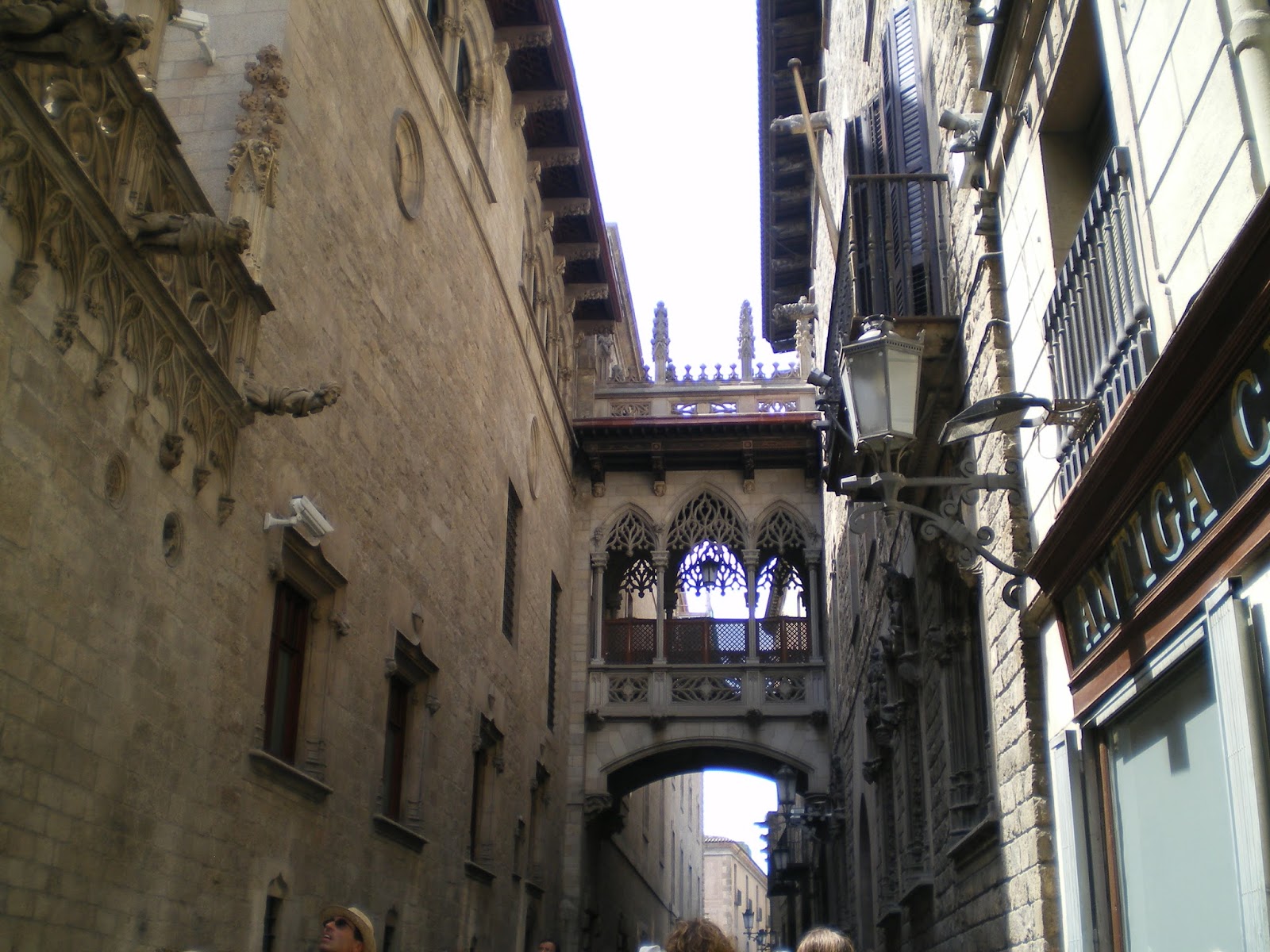 Street in Barcelona
I hope you enjoy the pictures of his creations, some I know have already influenced some of my writing. Does visiting new places get your mind racing? 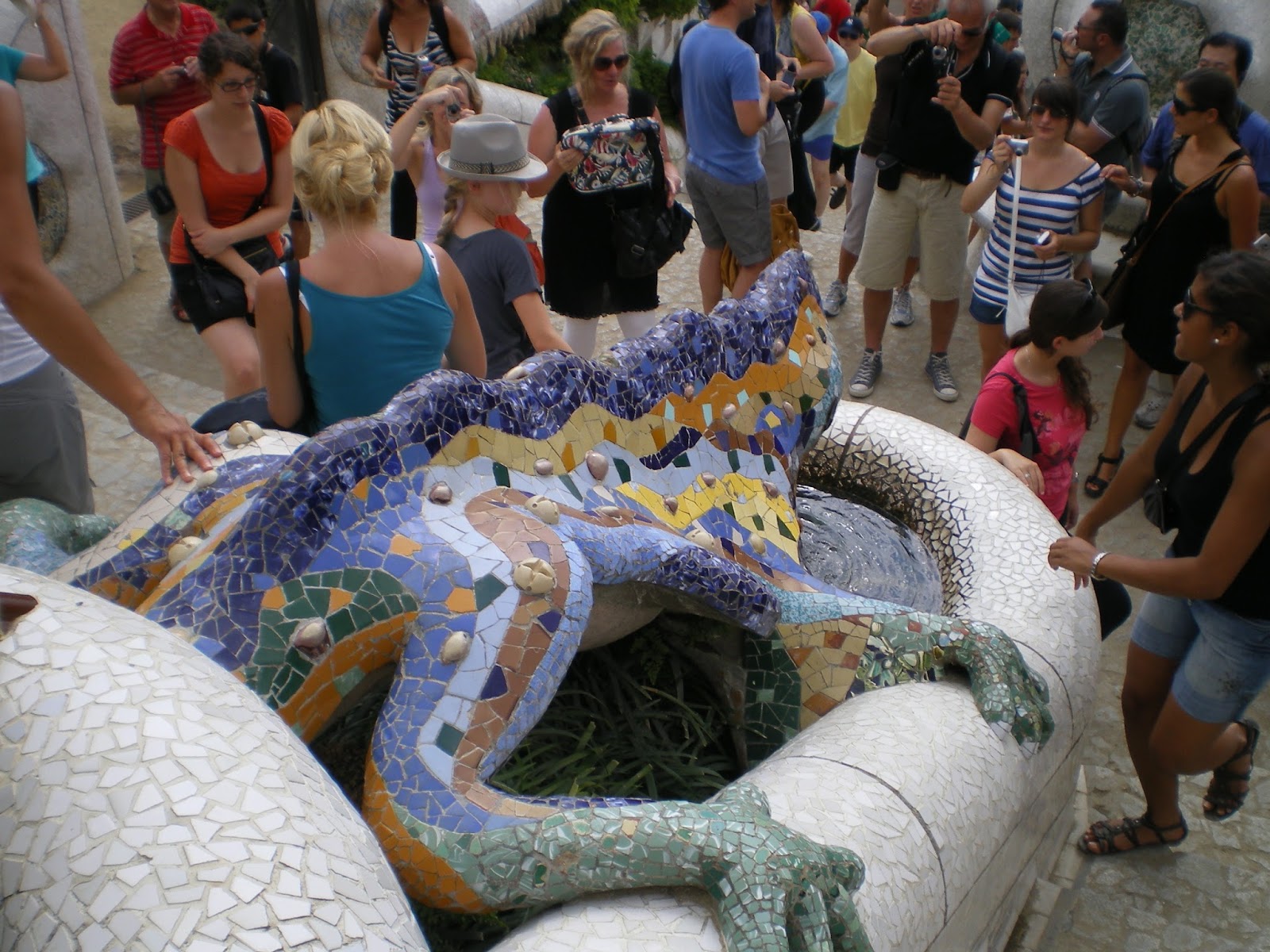 Mosaic Dragon at the entrance of Park Guell﻿ 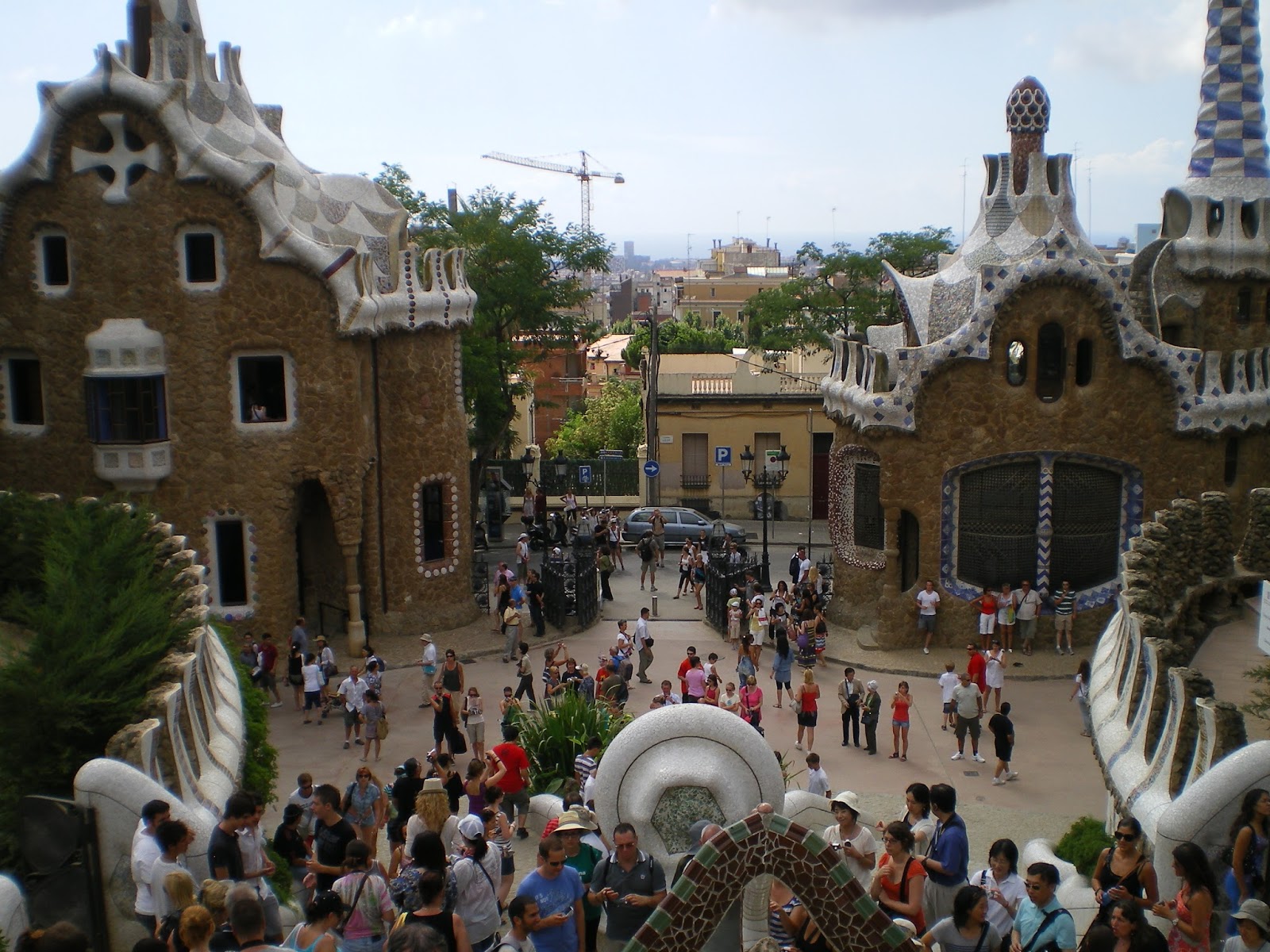 The Mind House in Park Guell
﻿ 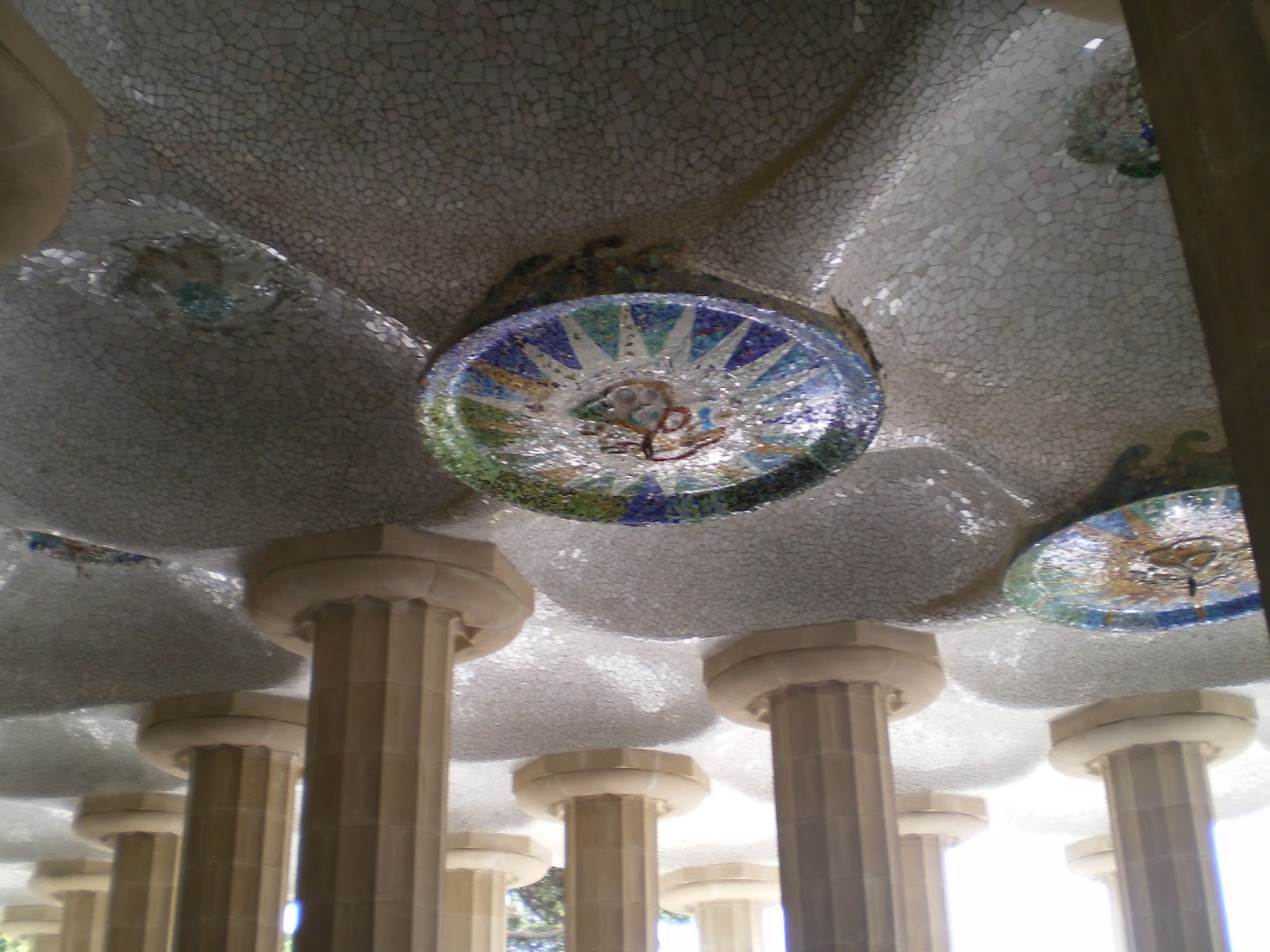 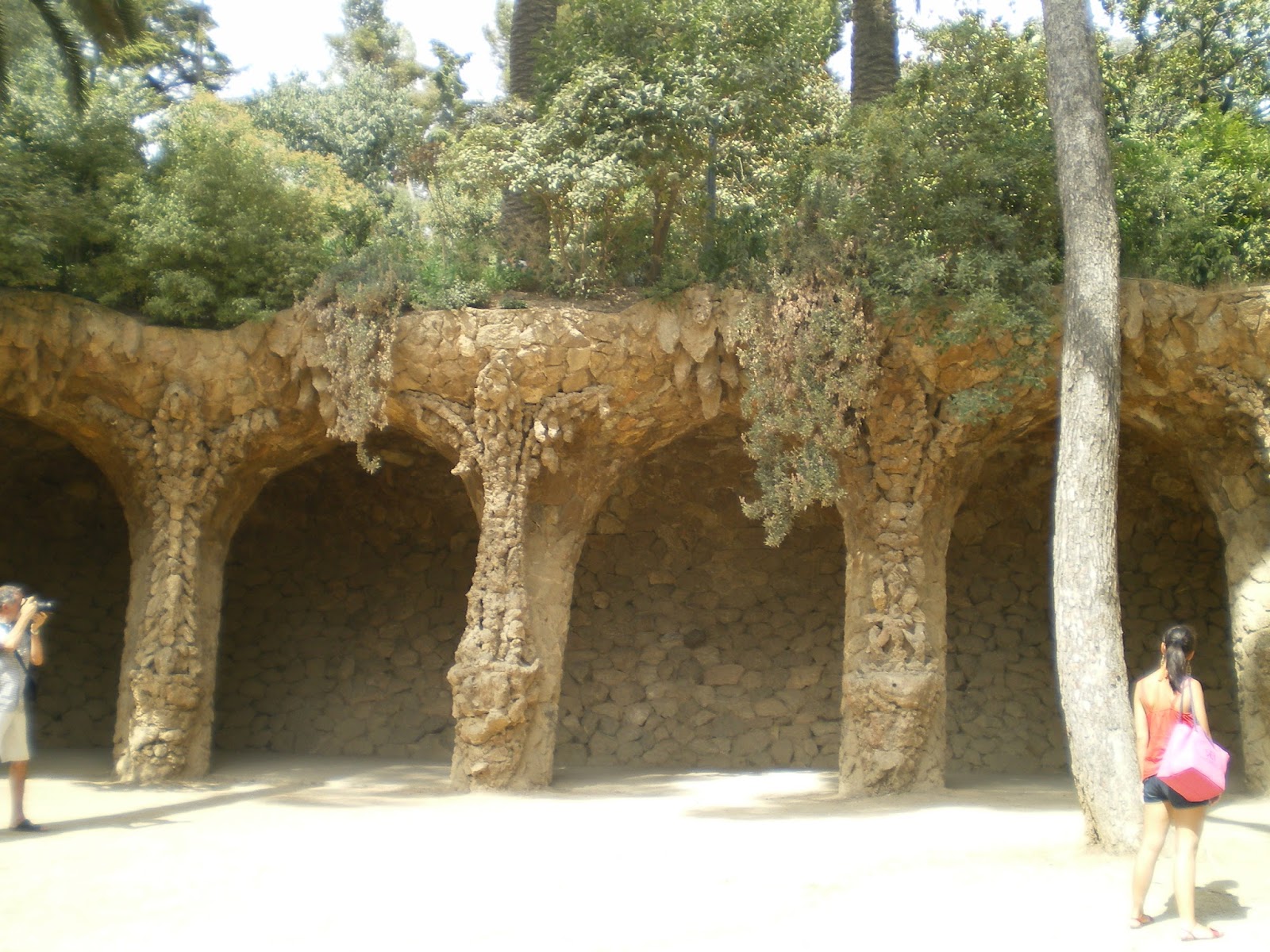 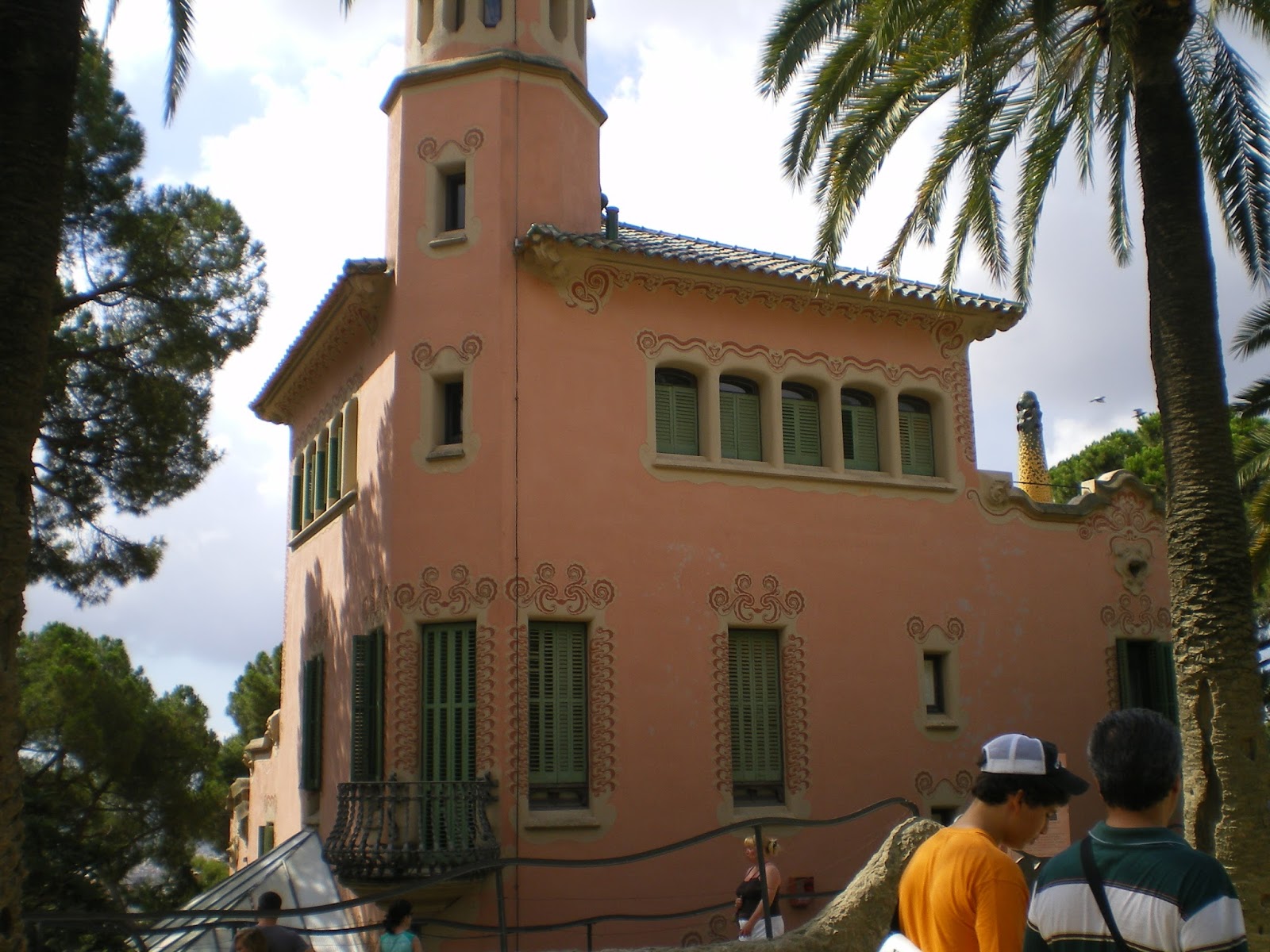 Today the British government is unveiling their plans to celebrate the centenary of the Great War on August 4th, 2014 and they have announced that children will lead the way in remembering the 10 million men who lost their lives. With children from every school in England, travelling to the First World War battlefields to pay their respects.

Now, the fact that kids are getting involved I'm sure won't meet with the approval of everyone, because of the bloodshed and the brutality that took place. But war unfortunately is part of all our lives, whether in the past, now, or in the future.

This week in the book world Suzanne Collins and Walter Dean Myers, National Ambassador for Young Peoples Literature, took part in a discussion with regards to writing for younger readers about war. Both feel that children need to be educated on the hard facts of conflict and I personally agree.

If children aren't informed, war as we are all aware can be romanticised. Children, especially boys can be led to believe that running off and fighting is somehow a cool thing to do, with horrific consequences. We see this now in Syria, where young boy soldiers are taking part in atrocities, as has happened in Somalia.

Of course boys being lured by war is nothing new and my own grandfather ran off at the age of fourteen to enlist in 1914. Luckily for him he was found out to be underage before he actually reached the front line and by the time he was able to enlist, which he did, the war was coming to an end. Otherwise, my family history would be a whole different ball game and I wouldn't be writing this today.

Children should be respected and by giving them every piece of information we have available, they will be able to make informative decisions in later years. If that decision means that they go off to war, when they are age to do so, they go off to war and God bless them. But, sweeping it all under the carpet and not discussing it will not protect our kids, in my opinion it will only harm them.


Posted by Christina Rowell Author at 05:29 No comments:


15 Miles from Edinburgh, the capital of Scotland, lies the town of Linlithgow. Linlithgow is no ordinary Scottish town because it has royal connections and holds the right to be called a Royal Burgh.

In the centre of the town you will find Linlithgow Palace, although it is a mere shadow of its former grandeur it is a reminder of the times gone by in the rich history of Scotland. Built in 1424 by James 1 of Scotland, it is an imposing building, as is its neighbour St Michael's Kirk which was built over 760 years ago. 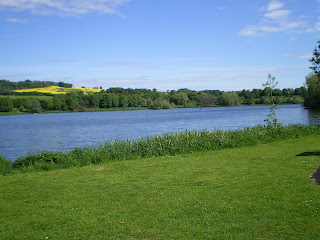 Loch-side view
Both buildings share a vantage point overlooking a loch, which teems with waterfowl and serenity. It is no wonder that the palace itself played host to most of the Stewart Kings and Queens as did the Kirk as a place of worship for the Catholic monarchy. 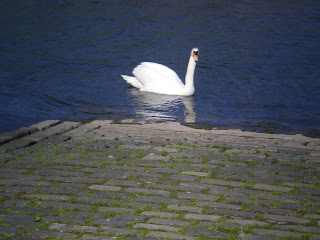 One of the loch's inhabitants, a Swan
Linlithgow Palace was Royal nursery to James v  in 1512 and most famously, Mary Queen of Scots in 1542, who became Queen of Scotland, age 6 days old, Queen Consort of France and who challenged Elizabeth 1, Queen of England for the throne. The bad blood between the two, eventually led Mary to lose her head, having been found guilty of treason. 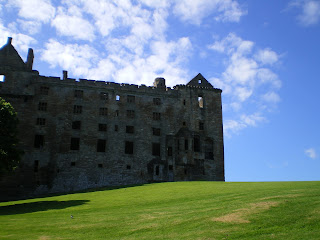 Linlithgow Palace
Unfortunately, the royal residence was ravaged with fire in 1746 but is no less a wondrous place to visit and still to this day hosts spectacular events, within the preserved ruins. One prominent one being in December 2012, when Chanel Metiers d'Art chose to show a collection of fashion, designed by Karl Lagerfield there. 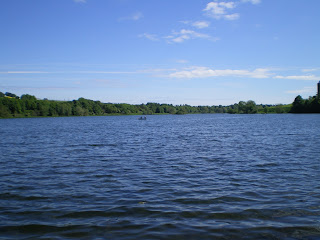 Rome Wasn't Built In A Day

In the last few weeks since the publication of my debut novel Salvation No Kissing Required lots of my friends and acquaintances have been congratulating me on finally realising my dream. But what has surprised me is that so many believe that publishing a book suddenly means that you have either come into a vast sum of money, or are about to. I wish.

While some skirt around the subject, others ask, "What will you be buying with your advance?" When I explain there is no advance only royalties, I'm met with a look of bewilderment. Then comes the question, "So why do it?" The answer, " Because I love it and my first goal was to get published. Nothing more, nothing less." On one occasion I also found myself trying to justify why I do something that may either pay nothing, or very little.

Yes, it would be great to earn a fortune doing  the thing that I love. And, I won't deny that it would be a dream come true to see my name on a best seller list, some day. However, I live in the real world not a fictional one. So, all I can do for now is keep writing, master my craft and keep setting myself goals for future publication. The way I look at it is, Rome wasn't built in a day! 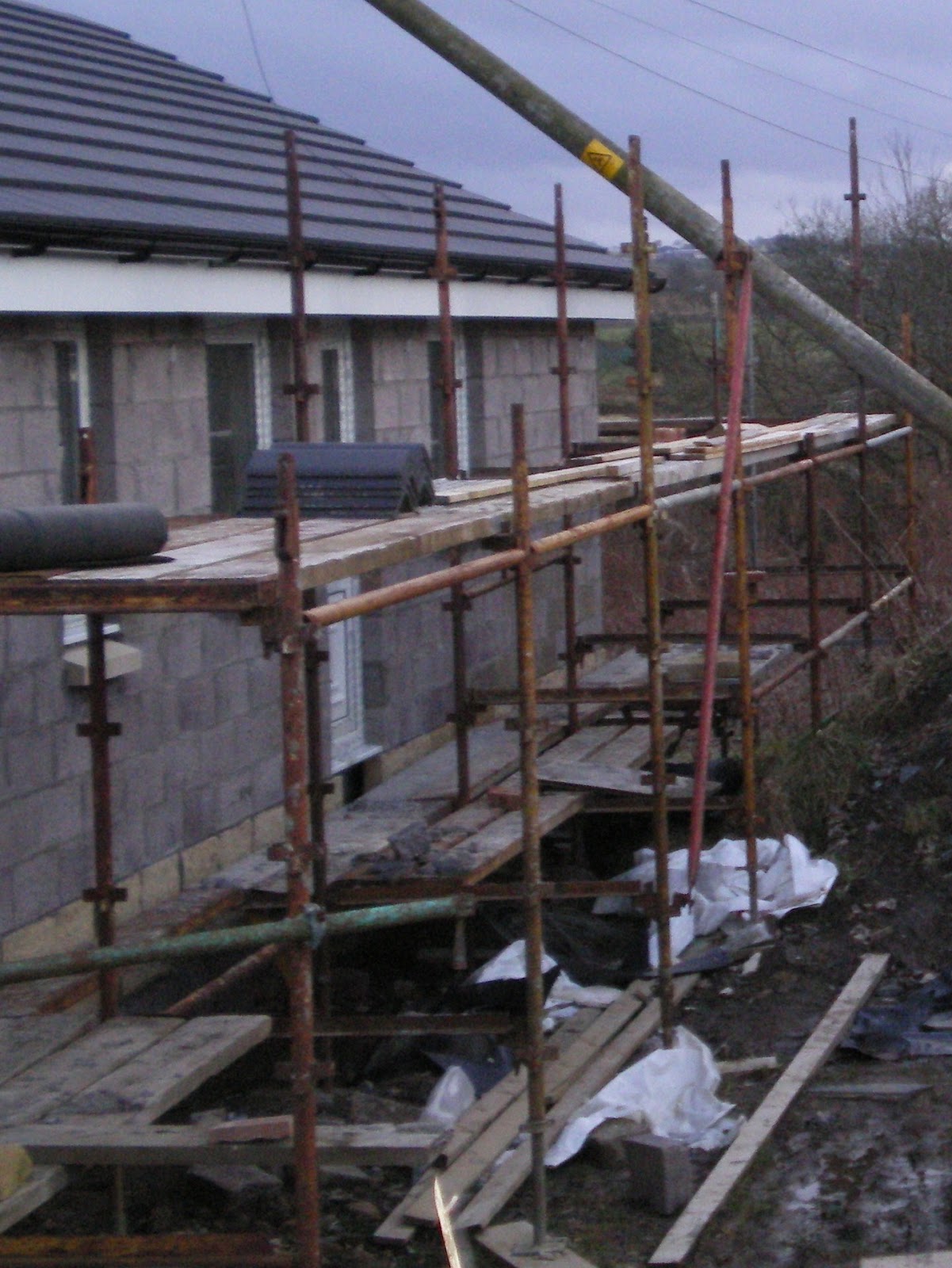