Surrounded by woodland and overlooking the River Clyde, is the sleepy 18th century, a former cotton spinning village of New Lanark. 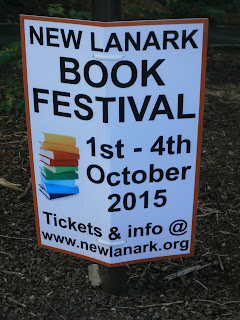 This World Heritage site receives visitors from all over the world and over the next four days it is planning to cater for those of us who are book lovers.  http://www.newlanark.org/


The public will be able to go along to meet and listen to a host of featured Scottish authors, in New Lanark's first-ever book festival and will take place in the, Institution for the Formation of Character building. 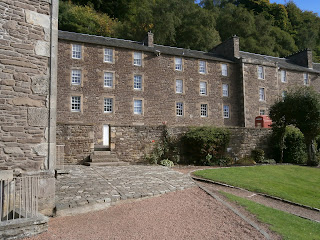 I went there last week and I can't think of a more picturesque setting to sit back and get to know our home-grown writers, read a book, sample Scottish food and drink. Similar to a stimulating and engaging book, New Lanark is a real page turner.   #NLBookFest


Posted by Christina Rowell Author at 23:19 No comments:

From Cradle to Grave

This will be the last post featuring Scotland's ancient capital, Dunfermline and as you would expect from a capital of Scotland it has a palace and an abbey worthy of royalty.


Dating back to the 11th century the abbey and palace has been home to our great Kings and Queens from cradle to grave. 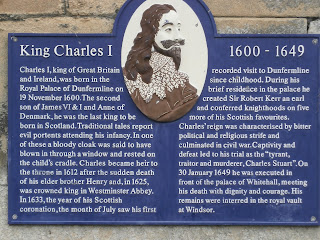 The nursery in the palace being the birthplace of Charles I; the abbey's nave a stately tomb to Queen Margaret, wife of King Malcolm III and their son David I.


But, most famously King Robert Bruce minus his heart was also interred here.


Inside the nave I found the atmosphere fairly eerie, however it was a place that I wished that the walls could have come alive and tell me their story. A story like no other.


Posted by Christina Rowell Author at 23:40 No comments: 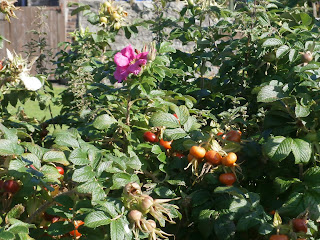 Digging deep into the sandy soil,
They edge our coastal roads.
When summer arrives their thorny exterior,
with colour explodes.

The white and magenta rose,
Wafts a scent that brings pleasure to the nose.

Their pollen provides the insect world,
With an abundance of heavenly food.
The red hips can be used to make syrup, tea or marmalade,
Whatever takes the mood.

They flourish in the sun and enjoy the sea's salty air.
Oh my pretty beach rose you grow in wild abandonment with such flair. 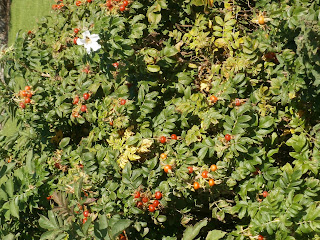 Posted by Christina Rowell Author at 23:57 No comments:

Dunfermline and Pittsburgh are linked in today's blog post once again. Seventy-seven years after the death of Brigadier Colonel John Forbes, featured in September 13th blog, in a modest home in Dunfermline, Andrew Carnegie was born.

Carnegie famous for Pittsburgh Steel and philanthropy left Scotland with his family at the age of thirteen years. Similar to Scot's poet and author, Robert Burns, Carnegie's parent's encouraged him to read and although his schooling was somewhat limited, he gained his education through reading books.

He never forgot his roots and in 1883, Dunfermline is where the first of the approximately 2,600 libraries throughout the UK and US opened with funding from Carnegie.

However, in my view one of the most generous gifts he gave to the town of his birthplace was the gift of Pittencrief Park. Having fond memories of sneaking in here to play as a child, Carnegie wanted this fantastic 76 acre estate to be a place that could be enjoyed by all.

His purchase in 1902 meant that it was no longer under private ownership and whereas previous owners including the Forbes had restricted access, all the town's people could now take pleasure from the beauty of the site.


His statue within the grounds, reminds the town's folk of his generosity and of course he can keep an eye on his old town.

Hot off the Press


Charles Dicken's, The Pickwick Papers and Arthur Conan Doyle's, sequel to A Study in Scarlet were first published by magazines. I don't know as to how many of these magazines were published, but I do know that putting it into print was a labour intensive process.

Recently I came across an exhibit in, the National Museum of Scotland, that it seems revolutionized printing in the 19th century; the iron hand press replaced wooden presses and was invented by American, George Clymer in 1813. Unfortunately George's invention wasn't received as well in the US and he moved to the UK to put it into production and the one featured was made in Edinburgh. 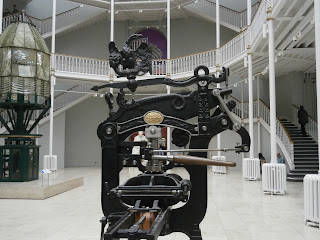 Posted by Christina Rowell Author at 23:19 No comments:

The Man that put the Pitt into Pittsburgh

Twenty-five miles from Edinburgh, is the town of Dunfermline, Fife. This ancient capital of Scotland,can be reached travelling from Edinburgh by road and rail via the Forth Bridges.

Over the next few weeks I'm going to feature in my blog, some fascinating people that were born or took up residence here throughout the centuries.

It is a large town steeped in history and its historical past has a place not only in the history of Scotland, but the UK, Europe and the US.

I made the short trip from my home this week to take photographs and familiarize myself again with the town I used to work in.

My journey started in Pittencrief Park, in Pittencrief House to be exact. The house built by Sir Alexander Clerk is now a museum and the surrounding estate is now parkland open to the public. But in the 18th Century this beautiful house and estate was home to Lt Colonel John Forbes, his wife Elizabeth Graham and was the birthplace of their son Brigadier General John Forbes.

Now if you don't know who Brigadier General John Forbes is; he is the man that put the Pitt into Pittsburgh.


Towards the end of the Seven Year War (The French and Indian War), on the orders passed down from the British, Secretary of State, William Pitt; Forbes set off on an expedition to capture Fort Duquesne, Pennsylvania from the French. He succeeded in his mission and he renamed the fort, Fort Pitt as well as naming and establishing the now city of Pittsburgh.

Not bad for a boy from the Kingdom of Fife.


Posted by Christina Rowell Author at 01:04 No comments: 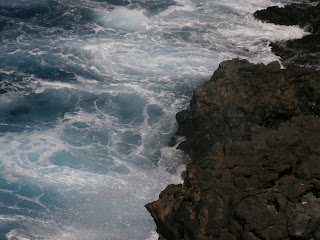 The waves rush into the shore.
They swirl, froth, spit and begin to soar.

Crashing against the rock.
Not caring that they are running amok.

The surfers, the paddle boarders enjoyment they give.
But frequently they take the lives of those who deserve to live.
Posted by Christina Rowell Author at 23:44 No comments:


Before a majority of the Scottish public had stirred from their beds this morning (Sunday), around 10,000 keen cyclists set-off on an annual challenge to raise funds for good causes in Scotland. For the last 17 years Cycling Scotland, has organised the Pedal for Scotland, 50 mile ride between Glasgow and Edinburgh, with enthusiasm increasing each year.


Riders setting off between the hours of 6 a.m. and 10 a.m. from Glasgow Green's, Peoples Palace through the city and then into the Scottish countryside, where they receive a warm welcome in the small villages and towns as they pass through.

The village I live in provides a stop off point, giving the cyclists time to catch their breath and replenish their energy with the intake of light refreshments. They travel another 10 miles, taking lunch in the shadow of Linlithgow Palace, before they don their helmets and get on their bikes once more for the last leg of the trip, the finishing line being Edinburgh's. Murrayfield Stadium.


This challenge is pedaling power at its best.

Everything in art is but a copy of nature

Everything in art is but a copy of nature - Rob Roy - Sir Walter Scott. The landscape, social turmoil and the conditions which the people of Scotland lived in through its turbulent history were depicted in his historical series of Waverley novels and others.

A new scenic rail route will be opened between Edinburgh Waverley Station and the Scottish Borders on September 6th and will take admirers of his work through some of the countryside that inspired  him.

The village of Tweedbank is where visitors will alight and at the new visitors centre in Abbotsford, they can view exhibits and the home of the once Sheriff -Depute of Selkirkshire.  http://www.scottsabbotsford.com/visit/visitor-centre/


The author of Ivanhoe and Rob Roy loved his country and I couldn't leave out some pictures of another haunt of his, Lake Menteith located in the Trossachs and Loch Lomond National Park. Inchmahome Priory on the lake has a colourful history and is linked to Scott's novel, A Legend of Montrose.

In his art of writing, in my opinion he did copy both the beauty and the sometimes cruelty of nature.

Posted by Christina Rowell Author at 06:33 No comments: