With an impressive ten titles under her belt, I'm delighted to introduce you to UK based author and writer of multigenre fiction, Toya Richardson. She has kindly agreed to a Q&A feature which I know you will love. 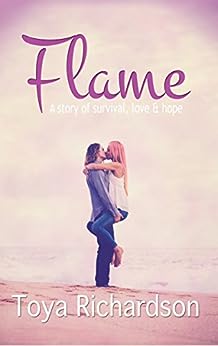 
Hi, thank you for having me. I've been writing since I was quite young. My mum always encouraged me to use my imagination and read as much as I could. She would also make up stories for me. For years, I'd been saying I wanted to write a book and the first one I wrote, Flame, first came to be around twenty years ago. She was desperate to see me published but she passed away before she could see it happen. Her death was the catalyst for me to attempt to realise my dream.Writing, quite literally, saved my life and in 2014 I finally achieved my goal. Each book I am fortunate enough to write dedicated to her.

I actually published my first book, eBook only, with Red Sage Publishing. It is part of an eight book paranormal romance series. Flame, which as I said I wrote around twenty years ago, was a Eureka moment. I was in the bath listening to music by George Michael, not my usual choice of music. I had a vision of a couple by a beach in the pouring rain and bam, Flame was born. It was so powerful that I stood up and shot out of the bath in search of paper and pen!
The YA Fantasy just popped into my head one day. I initially had an agent for this one, but it didn't get taken up by any publishers. At this point, I'd started to write a book based around modern day Atlanteans living on Earth. Again, the idea just kind of appeared in my mind. I sent it to my agent, but it wasn't something he specialised in. He did get someone to read it for me and they said it could fit into the same genre as Nora Roberts and Sherrylin Kenyon. After that I started  to read some of their work. Until this moment, I had never heard of paranormal romance!
The contemporary and paranormal romances are for aged eighteen and over. The YA from around twelve to thirteen and up.
Titles are always tricky for me and I find them harder to write than the actual book. In the end, I based it on what was happening in the actual books. Battling the Demons, book three for example is about mental rather than physical demons.

I love all my characters, but I do have two couples who are my favourites. Drew Greenaway and Elise De Silva in the paranormal romance because of their slow burning love. They have to go through so much before they become a couple.

Erin Munroe and Levi Sanders are another favourite.Their book, Destination Redemption, will be  released sometime next year. It's a contemporary romance set in Cromer on the North Norfolk Coast of the UK. Levi blames himself for the death of his family, even though it wasn't his fault. Erin is still grieving for her baby who was stillborn. The couple have to overcome some major issues such as depression and self-harming. It's a beautiful story and they're a wonderful couple in need of love.
I have been lucky enough to secure a contract with Troll River Publications for a series of five contemporary beachside romances. Destination Love, is due out on 1st June  2018. I'm very excited about this one. It's based in Waiheke Island in New Zealand and like each one in this series, I have been fortunate to visit each location. 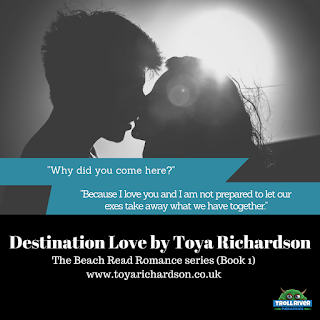 Here is the blurb and teaser for you....

"I've had enough of men to last me a lifetime. Think I'll stick to writing about perfect heroes from now on. Guys who can't hurt me, or give me grief." Is going to be Faith Morgan's mantra from now on.

After finally leaving her unsupportive and unloving boyfriend when her romance novel is signed to a large publishing house. Her best friend suggests she visits her aunt on Waiheke Island in New Zealand to get away from it all. She jumps at the chance and Faith vows to steer clear of men. What she doesn't expect is to find love in the shape of sexy local businessman, Dean Jameson.

As their relationship becomes more intense they admit their feelings for each other. Together they overcome stressful encounters with their ex partners and life is great. When her return date looms closer, they begin to fear for their future.Will their love survive the distance, or will it fade when  they're miles apart?


Faith let out the frustrated breath she'd been holding when Dean reappeared.
"Sorry about that. Are you ready to go?"
"One minute, Dean, come and clean the mess off the stove before you go, please."
"But, Dad..."
" No buts. I need to focus on making a fresh batch of sauce. You made the mess. You clean it up."
The tension between her and Dean was driving her insane. It took all her strength not to demand that
Ian let them go. Retaking her seat, she attempted to focus on her aunt and Mel's conversation.
What's taking him so long?
Several long minutes later, Dean reappeared. Grabbing her hand, he almost dragged her to the door.
"What's the hurry, Dean?"
"Please, Mum, if I don't take Faith out here now we'll miss the sunset."
"Dean..." Ian had reappeared from the kitchen.
"Not now, Dad."
Faith almost laughed at the desperation in his tone.
"Eager to get me on my own?" she asked.
"You have no idea," he murmured in a low voice.
They walked in silence until they reached a beautiful grassy terraced area which looked out over the vineyard, through the trees and on to the ocean. He took her hand in his. She shivered under his touch.
"You're trembling. Are you cold?" His words sounded like velvet seduction.
"No. I..."
The intonation of his speech made his words sound very intimate. He stood behind her and wrapped his arms around her waist, pulling her flush with the hardness of his body. Then he rested his chin on her shoulder and she had to stifle a moan while goose bumps covered her skin.
"Watch, Faith, the sun is about to set."
Placing her hands over his, she relaxed against him and watched the sun start its journey downwards. She let out a tiny gasp.The yellow disc appeared to grow bigger for a while, before it slowly began to shrink. Its golden rays spread out across the water like a soft, shimmering cloth.
The sea rippled like liquid gold. The yellow was surrounded by an orange hue, spreading warmth
upon the sea.
"Oh, Dean, that was beautiful. I've never seen a sunset like it. Not ever."
Turning in his arms, she placed a light kiss on his lips. His mouth descended on hers. She closed her eyes and opened her mouth to him. His mouth captured hers and moved in an unhurried, slow, seductive pace.
A moan escaped her lips. An encouragement to deepen their embrace. Teeth nipped at her bottom lip. His tongue slipped inside her mouth, skilfully turning her body to mush. Her hands tangled in his hair, tugging him closer. Possessive growls made her stomach flip. Domineering sounds which turned her on even more. Hands slid gently down her bare back. She squirmed and shivered with each teasing caress. 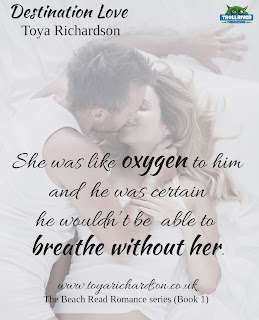 I love getting to know my fellow authors and today has been a pleasure. Readers you can find out more about Toya and her books by clicking on the links below. 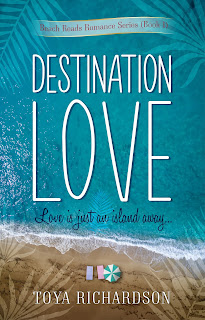 
Posted by Christina Rowell Author at 00:35