What a Wonderful World it Could be 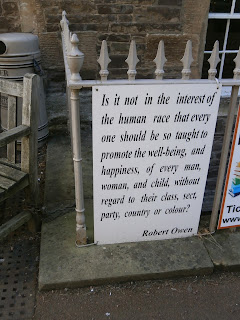 In the early 19th-century in the UK, many of the poorest population were employed in some way or another in the textile mills. The work was not restricted to adults, but children as young as the age of five worked alongside their mothers, as well as orphans. There were no infant schools or creches for the children, just sweat shops and a life of hard labour, working in excess of 12 hours per day.


Robert Owen, a mill manager from Wales knew that the use of children in the mills was wrong and believing that the future of society evolved around them he wanted to change this cruel practice. 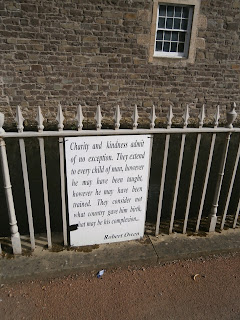 After marrying a Scottish girl, Owen moved to New Lanark, Scotland, where he became the manager of his father-in-law's mill. This is where he put his beliefs into action, he removed the children from the factory floor into schools he had built for the worker's children.
Schools were a rarity, his nursery and infant schools were the first of its kind, a place where the children could learn and play and their mother's could go to work knowing that their children were out of harms way.


His vision didn't stop at schools, he envisaged a community where all were treated as equals and he went about building a model village in New Lanark. Social housing was provided for the mill workers, a shop where they could buy reasonably priced food, and a fund set-up for health-care. It was a place where families could work, live in safety and generally enjoy life together.

Robert Owen, who some saw as an idealist, set about trying to make it a perfect world to live in and he took his ambitious plans to Indiana, US. Here he purchased the town of Harmonie, renaming it New Harmony, however, he returned to the UK, having failed to develop his plan successfully there.


He wrote essays on the 'New View of Society' and the 'Principle of the Formation of the Human Character' on which his ideals were based and his conception of what a wonderful world it could be.