As the Petals Depart 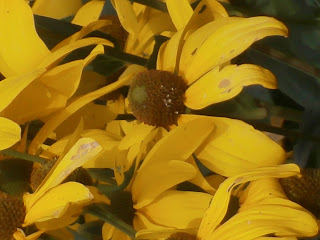 Hi, remember me. I haven't posted in a while, you could say  I reached a hiatus. Over the last few months. my brain has popped back into writers mode, ideas and most importantly words have started to be put down on paper once again.

Blogging is something I always enjoyed. Writing various themed posts twice or three times a week was fun. However, when your ideas temporarily dry up, the enjoyment fades. I found in the past that my inspiration came from ongoing events happening around me, places I had visited, things that I had read or, heard about on the radio.

So, here I am now about to tell you what prompted me to write this post. On the island of La Palma, a neighboring island to where I live here in the Canary Islands, there has been an ongoing natural phenomenon. Over the last seven weeks,  the eruption of Cumbre Vieja has caused devastation for a number of the island's 84, 500 inhabitants. Fortunately there has been no loss of life, but the lives of the islander's whose homes, businesses, towns and farmland that lie in the path of the lava flow, have been turned upside down.

On November first, All Saints Day (Dia de Todos Los Santos) is observed in Spain and a day when people pay their respects to their loved ones who have sadly departed. On the island of La Palma this could not be done as the largest cemetery  has been carpeted by a thick covering of volcanic ash. Also surrounded by amass of lava the area is totally inaccessible to residents, forcing their culture to take a back seat.

Knowing how distressing this was for those affected, the Spanish Air-Force took to the skies. Having loaded their helicopters with sacks of flower petals, the onboard personnel took it upon themselves to pay the islanders respect on their behalf. They released the petals over Las Manchas Cemetery, hoping that their actions would alleviate some of the grief felt.

This wonderful gesture, I found moving and I wanted to share it with you. We'll chat soon. Thanks for reading and take care.

Who  would have thought my shriveled heart could have recovered greenness?

Quite underground; as flowers depart to see their mother-root, when they have blown,

Where they together all the hard weather,

Posted by Christina Rowell Author at 07:32