Where Literature and Bloodthirstiness Meet

I like to take a road trip at least once a week with my partner. With the picnic hamper filled with lots of lovely goodies, including a flask of coffee packed away in the boot of the car, we set off as early as possible.  As to where we end up, it could be a twenty-minute drive away or as it was last week, a two-hour journey.


You'll know if you are a regular reader that I have an interest in churches, graveyards, rivers, oceans, castles, amongst other things and I try to take as many photographs as I can to use in my blog and, therefore we plan our outings around that.

Once I've done a little research, we sit down the night before, check the route, anticipated mileage and importantly, the weather forecast. If all seems in okay we're ready to rock 'n' roll.

Last Tuesday was no different and I wanted to visit the town of Dumfries, Galloway. I had visited here many years ago and although I knew it is a town with a strong literary connection, I didn't realise it was also a burgh with a bloody history.

We parked in a car park overlooking the River Nith, an ideal place I thought to eat our picnic once we had walked around and explored the nooks and crannies I remembered or had discovered whilst fact-finding. 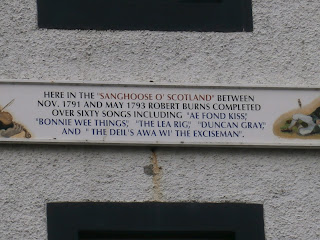 It's literary past was the main reason of my visit because this is where Robert Burns created some of his best works such as Ae Fond Kiss. It was the place where he spent approximately 5-years before passing away and I've included a couple of pictures of the signs that now have pride of place on the outside of the white-painted building that was his home. 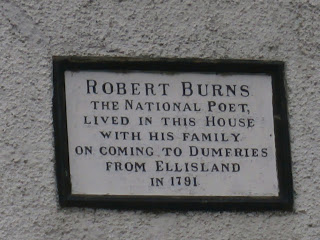 Ironically, his statue stands near the Gothic revival, Greyfriars Church, while the church was re-built after Burns demise, he had actually been excommunicated by the clergy of its predecessor. A man who is infamous for his dry wit, as well as his romanticism, I think he would have thought he had the last laugh there.

The town's sanguinary past is a historian's dream, Robert the Bruce murdered, John III Comyn at Greyfriars Church in the early 14th-century, Scotland's first hanging also took place in the town,
and we shouldn't forget that burning witches in this part of Scotland were also a regular occurrence here in 15th and 16th-centuries.

At the end of our sight-seeing, it was time to get back into the car, eat, drink coffee and take in the beauty of the river as it flowed under the Devorgilla Bridge dating back to around 1432. It had been a great day and certainly gave me lots to think about.
Posted by Christina Rowell Author at 23:45