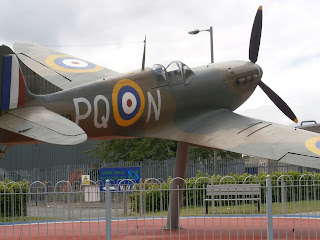 Five years after the, June 6 1944, D-Day landings, George Orwell's book, 1984 was published. The dystopian world it took place in with, Big Brother, watching the inhabitants every move and taking note of their every thought I suppose doesn't seem so far fetched as it was back then in 1949.

However, if brave men and women hadn't made that journey in 1944 to France, what would our world be like now?

There is the chance that we would not have the right to have free thoughts, or individuality as it was in Orwell's world. Who knows? But, thank you.
Posted by Christina Rowell Author at 10:24