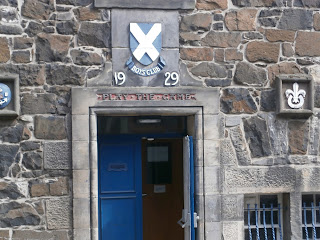 I worked in the city of Stirling for several years and I used to love walking around the streets in my lunch-hour. Some of the streets are paved with cobble-stones which aren't particularly kind to your feet when wearing a pair of high-heels. But, the sights that surround you, are worth the blisters and pain. 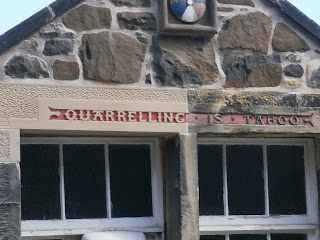 One building that I used to pass regularly was, the Boys Club, on St John Street. Previously an old butter and poultry market, the building was renovated and extended in the late 1920's. Concerns had been raised in the city about the rise in youth crime and ex-chief Scout for Scotland, Major F. M Crum, having an interest in youth welfare, founded the club.

The Major having fought in the Second Boer War and the First World War created a youth movement for boys who were not in the Boys Brigade, or Scouts. Having founded Scout groups previously, Major Crum knew that young boys needed an interest. Somewhere they could go to meet-up with other boys,  burn off their excess steam and develop leadership skills amongst them.

The club initially offered them a place to play billiards, bagatelle, ping-pong and draughts. With activities such as football, cricket, boxing and gymnastics being added at a later time. As Major Crum had hoped, the numbers in youth crime did decrease and by 1944 the club had 164 members.

The Major himself was a recognised hero in the wars he served in, serving in the Mounted Infantry in the Second Boer and a sniper in the First World War. Additionally he was a hero amongst the Scottish Scout movement. He wrote both his memoirs that were initially published in pamphlet form and a book titled, Camp and Character training, published in 1927.

Posted by Christina Rowell Author at 23:51