Four hundred and thirty years ago Mary Queen of Scots was executed. Writing a letter before her execution, to Henri III, King of France, the brother of her first husband, she tells him of her plight.
Mary being educated in France, wrote the letter in French, six hours before her death at, Fotheringhay Castle, in Northamptonshire. She informed Henri, that she believed she was dying because of her Catholic faith, as well as her claim to the English throne, asking also for his prayers.


The letter is in the possession of the, National Library of Scotland and because of its rarity it is seldomly exhibited. Last week, the first time since 2009 the library did display the letter to commemorate the Queen of Scotland's demise. On display for only a few hours, those lucky enough to view it were able to see a special piece of Scottish history. Unfortunately, I didn't manage to do so. 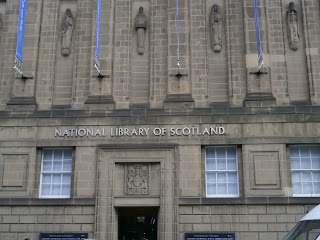 However, the letter can be accessed via the, nls website and you can read Mary's last words there. digital.nls.uk/mqs/letter3.html.
Posted by Christina Rowell Author at 04:42