As a writer of fantasy when depicting a scene I try to imagine the sights and sounds that my characters would encounter. The color of the sky can especially in my opinion help set the mood and help the reader visualize the scene.

There are times I've written about strange happenings in the heavens above and wondered if my ideas were too fantastical, therefore probably making it too difficult for the reader to envisage. 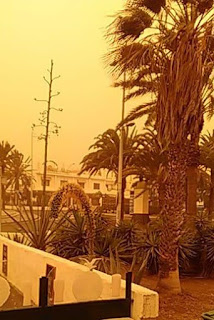 However, reality can also create situations that are hard to believe and last weekend here in the Canary Islands we found ourselves living in a surreal world. The beautiful clear blue skies which we have pretty much all year round turned ochre and the warm wind started to blow at gale force speed. The 'Calima' the name given to the hot east- wind from Africa which we encounter all year round, had carried much more red sand from the Sahara Desert than was normal and while it was an amazing sight it caused havoc on the islands.

Going outdoors was advised against as in these conditions, breathing can be difficult and the winds were causing structural damage and fanning wildfires. Flights in and out were suspended and being diverted to other locations in mainland Spain, a logistical nightmare for the companies and those passengers involved.


48 hours on the hot wind remains, but it's time to clean up the mess and repair the destruction. Thankfully I only had lots of cleaning up to do, but for those who were badly affected, I'm hoping our real-world doesn't turn into a fantasy one again for a long time.


Posted by Christina Rowell Author at 06:12